Dying for a dose of
Caela and Kelliye?

Click the link below to binge watch Season 1 and relive the fun! 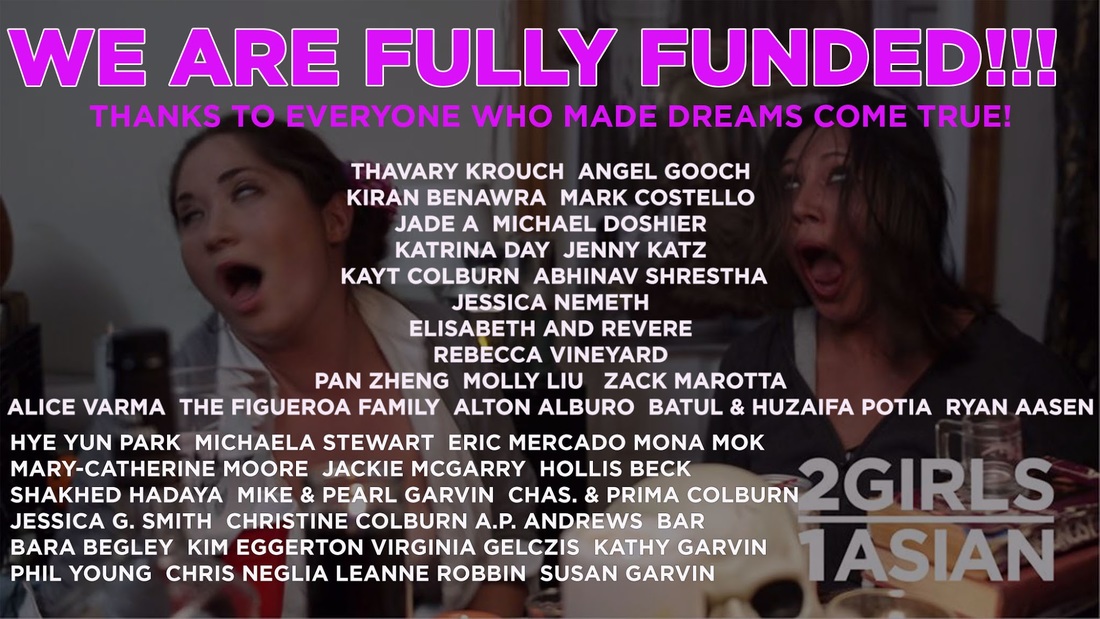 THANK YOU SO MUCH TO EVERYONE WHO CONTRIBUTED TO THE CAMPAIGN! And many, many thanks to Seed and Spark for hosting us on their site!

THE MIDSEASON IS HERE! 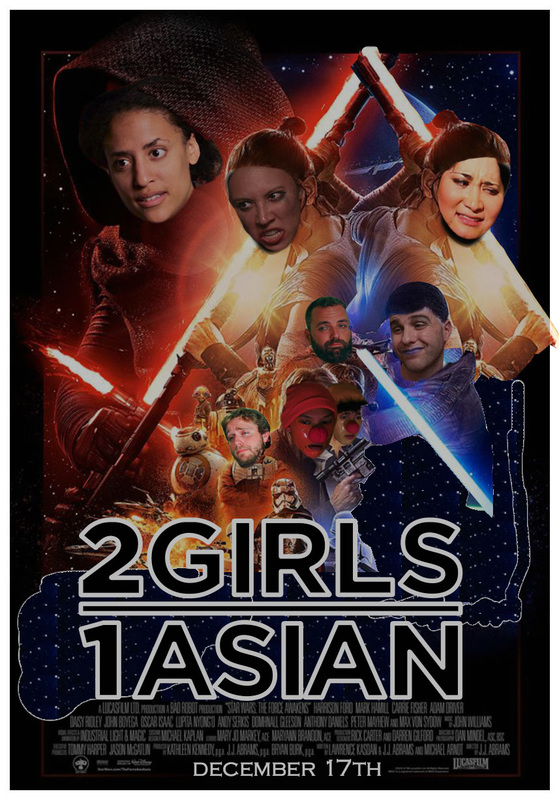 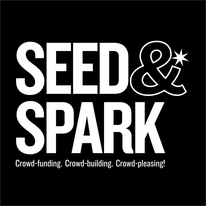 We have just launched our campaign with Seed&Spark, a crowd-funding organization supporting independent film artists! We aim to raise $3,500 to pay for production costs of the midseason, as well as begin a fund for pre-production costs of our upcoming season. We at 2 Girls | 1 Asian are devoted to diversity both on screen and off-screen, promoting female friendships, and consuming as much rice as possible... Which are three pretty great reasons to donate. Cheque it out HERE, and have a very hapa holiday! 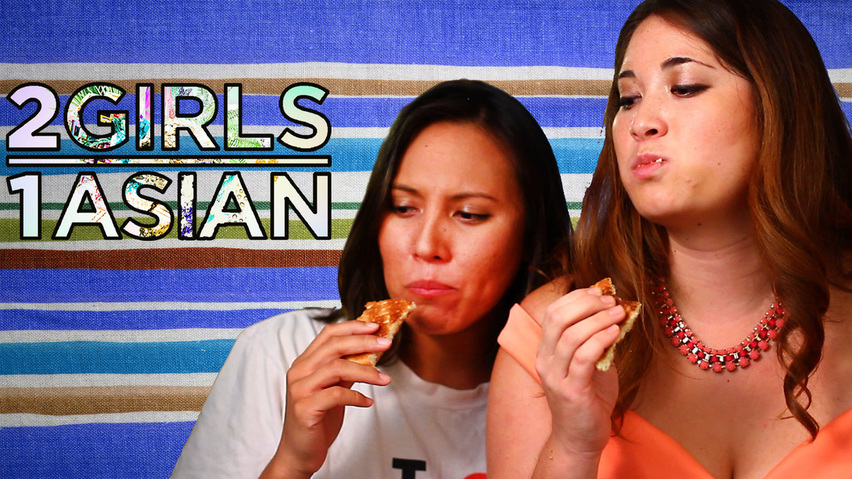 The creators of 2 Girls 1 Asian announced they will release brand new mid season episodes centered around the holidays: "My Bloody Valentine," "Orphan's Christmas," and "Freaky Friday." After a year and half of a creative hiatus, these two Hapas are reeling us back in with not one, not two,
​but THREE new episodes on December 17, 2015.


Creators Kelly Colburn and Kaela Garvin released a full seven episode season in the summer of 2014 and are in talks to film a full second season for release in late 2016. These women continue to create a lane for themselves by bringing their real  cultural experiences to the world and are not afraid to laugh at the vivacious colorful moments that their friends bring on their journey through this thing we call life.  "Kelly and I have been through a lot of changes in the past few years, and these bolder episodes reflect that in a heightened way: our characters are still deeply flawed, but they're coming to terms with how to function in a word that doesn't revolve around them," Garvin says.

Episodes Synopsis
Halloween brings with it the requisite spell-casting, leaving Caela and Kelliye trapped in each others' bodies for a "Freaky Friday."


While stuck in New York over the winter holidays, Caela and Kelliye bring together their band of closest friends for a strife-filled "Orphan's Christmas."


On Valentine's Day, Caela and Kelliye navigate being single, broke, and plagued by women's health-related bowel problems in "My Bloody Valentine."


After meeting in college, creators Kelly Colburn and Kaela Garvin bonded over theater collaborations,  romantic lives (or lack thereof), and most importantly, television.  Kaela and Kelly were drawn to entertainers who manage to break stereotypes with humor and objectivity; they loved female-driven comedy, but didn’t often see themselves reflected in the entertainment they're offered.

As an answer to that, they created 2 Girls | 1 Asian, which follows Caela and Kelliye, two half-Asian actresses living together in Brooklyn. The first season follows the girls through breakups, career trials, apartment troubles, and even fissions within their friendship, but ultimately it's the story of two girls who value each other more than they value the mistakes the other makes. Their perspective on race in America gives  a unique filter through which to view the "single girl in the big city" narrative, so the  episodes actively work to subvert Asian American stereotypes they are tired of seeing.
###

Blog of the week!

Blog of the week!

Click the image below to read Kaela's emotionally stirring entry as part of #MyAsianAmericanStory movement, a hashtag created by Jason Fong to combat the diminutive comments made by the Republican candidates in recent debates.

WE'RE BAAAAAAAAACK! Did you miss us? 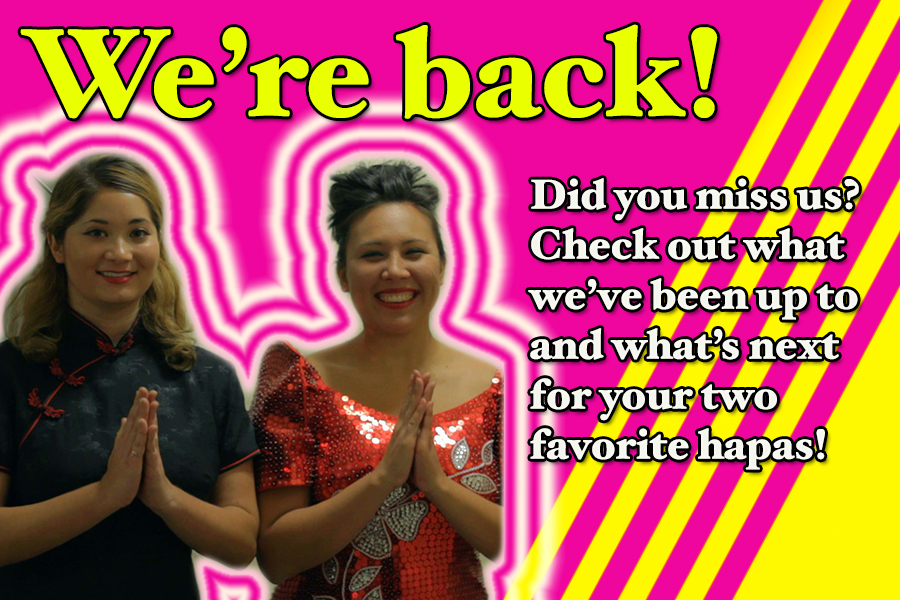 CLICK THE IMAGE ABOVE TO SEE WHAT KAELA AND KELLY HAVE BEEN UP TO! 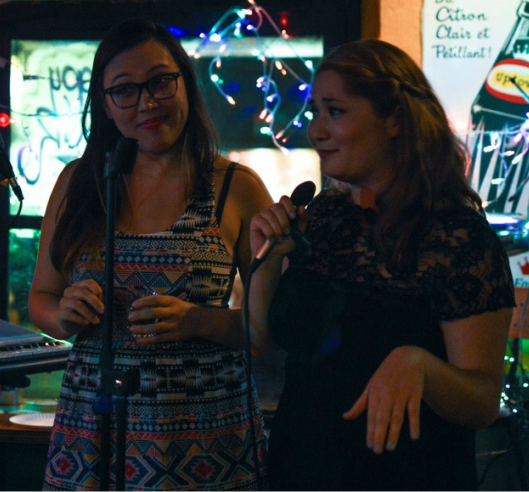 Hope you all have had a splendid Halloween, Thanksgiving, Christmas, New Year, Valentine's, Mardi Gras, and anything else in between!

Sorry for our absence. Kaela and Kelly have both been busy little bees!


Kaela recently assistant directed Straight White Men the Young Jean Lee play that premiered at The Public last fall, costume designed 4 shows for a variety of independent theater companies, and is currently editing her newest play Corner's Grove which will premiere this summer at the Planet Connections Festival.


Kelly now works part-time at Blue Man Group as a video operator, stage manages regularly at Playwrights Horizons Theater School and The Meisner Studio, and will be assistant directing the short independent film Chocolates For Sale, directed by DJ Mendel.

ANYWAY, let us stop bragging about ourselves and let you know what's up with 2G1A!


The creative team has been working fast & furiously on producing the SEASON 1 DVD for our donors. Special features include a behind the scenes featurette, a blooper reel, as well as commentaries by Kaela and Kelly for each of the episodes.

DJ RiceCooker was kind enough to send us over their show file from the other night and we took the liberty of cutting together the 2G1A segment in case you missed it on Tuesday evening. We had a BLAST chatting with Kathy and Karin and can't wait to chat with them again this fall. Check out the 2G1A segement below!

Kaela and Kelly made their radio debut chatting with the lovely Kathy + Karin over at UCLA Radio this evening on topics ranging from Taco Bell to how to fix the lack of diversity in Hollywood today. They'll be featured again later in the Fall so stay tuned! Thanks to those of you who tuned in tonight to hear the sweet tunes and good chats. The full interview will be available here on the website for those of you who couldn't tune in. Check back soon for updates! xoxo azngirlz

Come celebrate the season finale with us this Thursday, July 31st!

2 Girls | 1 Asian in association with A'LaGO PR and Brad's NYU is hosting a party! Come out on July 31st and join us as we wrap up the season with our final episode. There will be live bands, raffle prizes, and good times to be had! See you there! 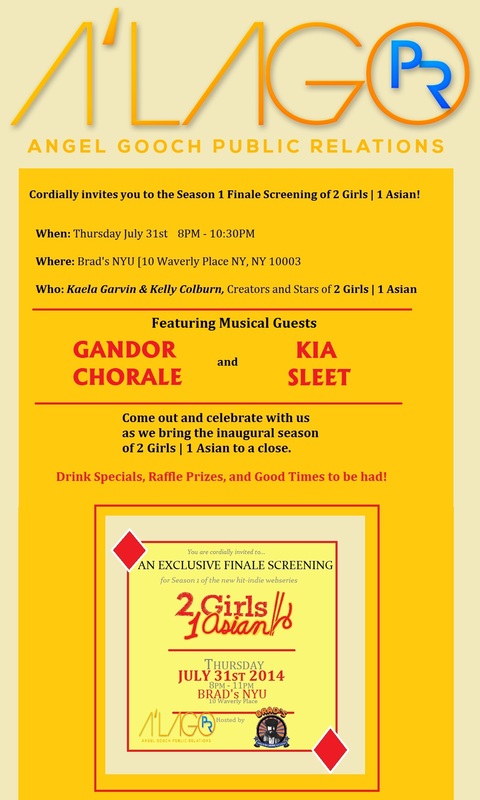 ﻿"How are we going to pay rent?!" Caela and Kelliye asked themselves last episode...

Find out tonight on the newest episode of 2 Girls | 1 Asian! 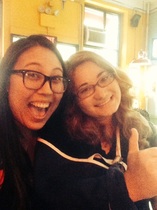 HAPPY THURSDAY! Episode 2: "What Are You?" launches tonight at 9pm EST. Based on an actual experience the real life Kaela and Kelly had last summer this episode is near and dear to our hearts. Also, in the picture to your left, you can see their lovely faces and Kaela's broken arm. Watch the episode to see her arm NOT broken. 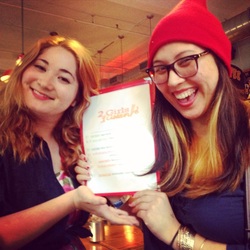 On Thursday, June 5th, 2014 - 2 Girls | 1 Asian launched LIVE on the internet! The Cast and Creative team held a premiere party for friends, family, and colleagues at the infamous Brad's NYU where many a writer's meeting has been held for this little webseries. The premiere party functioned dually as a fundraiser for Season 2.

"I love the balance between minority-driven comedy and class-less-ness... Is that even a word?" - Random White Person

"The way these two young women navigate their way through the New York City theater scene, which is historically not kind to the ethnic or the ethnically ambiguous, is both hilarious and inspiring. Two thumbs up" - Siskel and Ebert